Overview of the Golf Season

On Thursday 20th June 2019 over 40 aspiring golfers from the CBS gathered at Omagh golf club to contest for the replica Claret Jug donated by Conall’s parents in memory of their son who himself was a fantastic golfer both for his club and for his school. The weather stayed fine and the course itself was in immaculate condition. In the end the winner was Tom Quinn who defended the title of ‘Champion golfer’, having won last year as well. His score of 45 points included a one under par back nine. Runner up was Eamonn McAleer and Gross winner was Conor Byrne. The 6-hole event was won by Tiernan Kelly with Ronan Kelly winning the 9-hole competition. At the prize-giving Ciaran and Mary, seen here with winner Tom Quinn and CBS captain Conor Byrne, thanked the club for facilitating the event again and they expressed their delight at the large turnout of pupils. 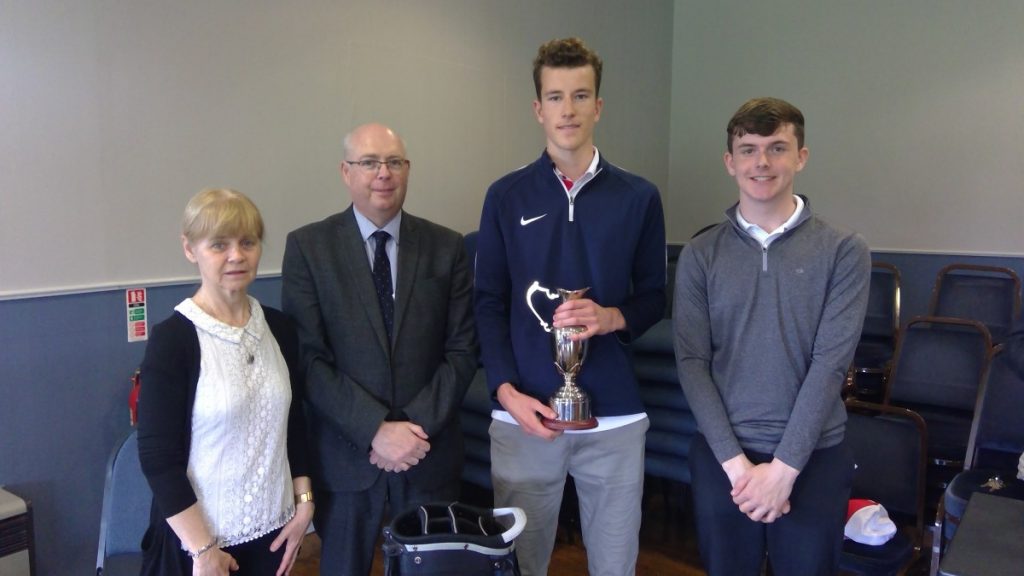 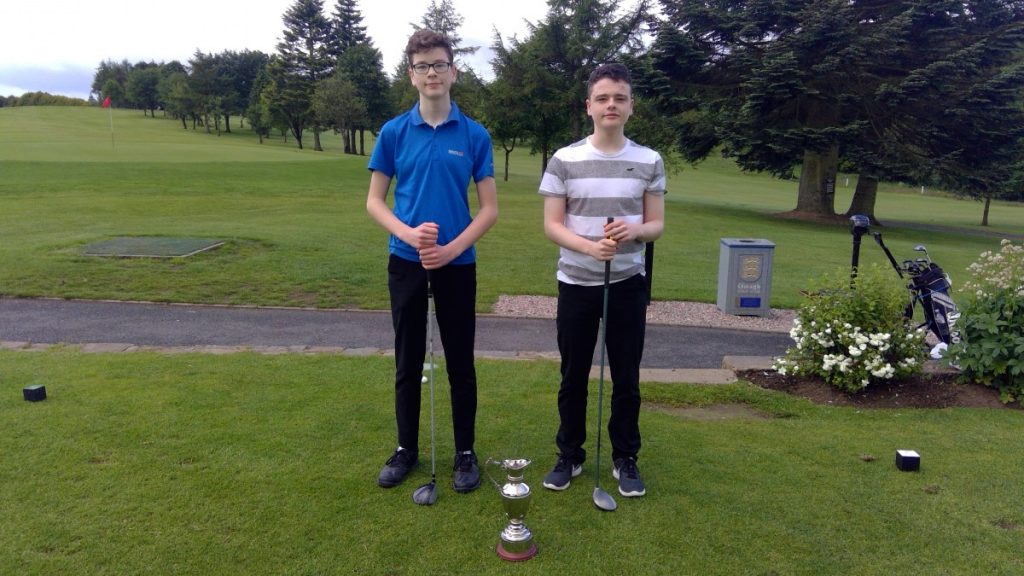 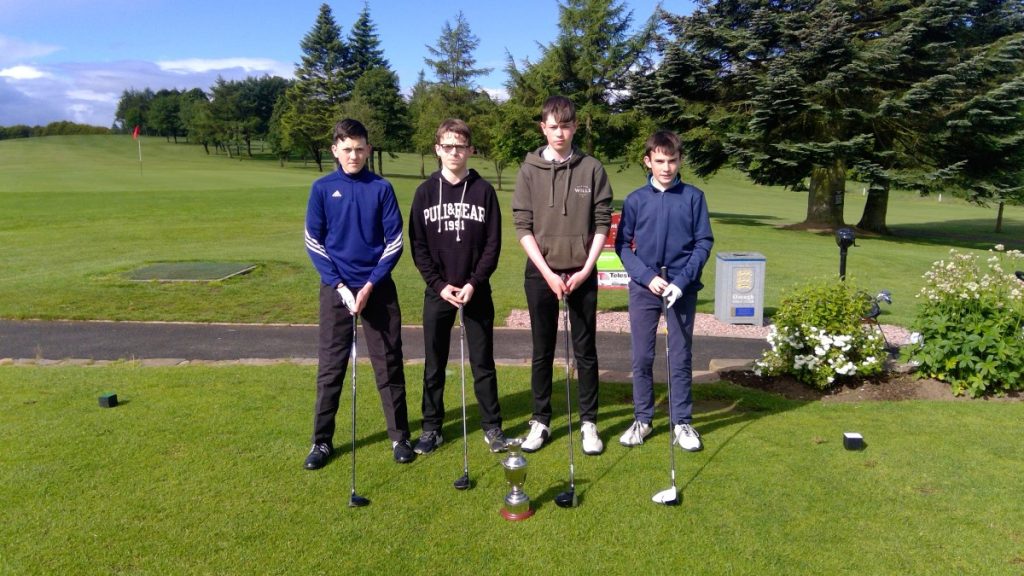 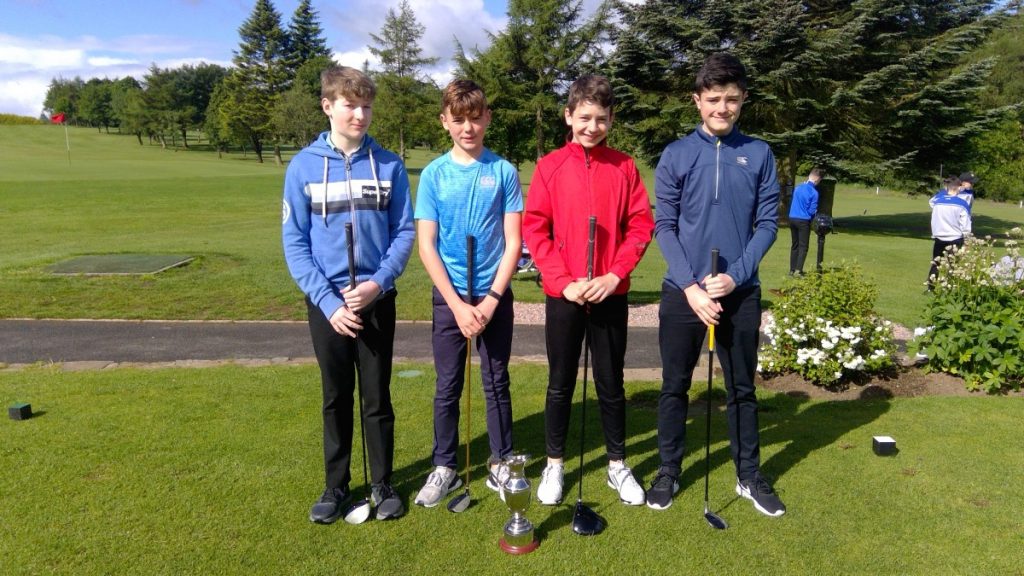 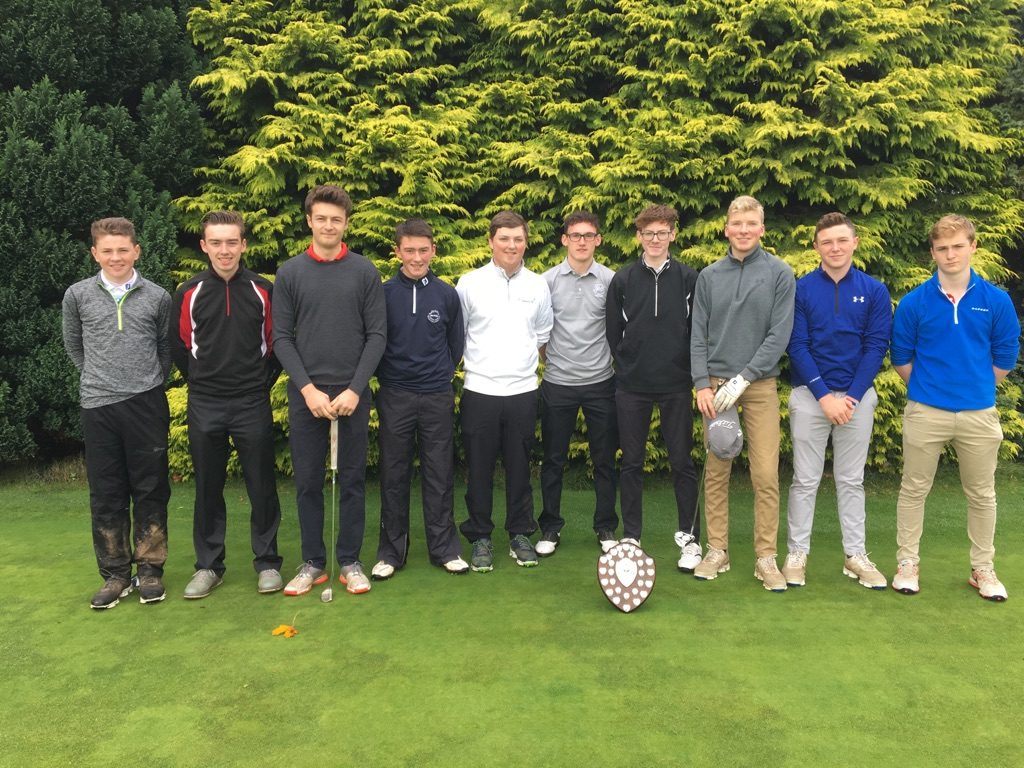 Omagh CBS overcame their local rivals The Academy in their recent Peter Passmore Shield golf match held at Omagh golf club.  Since both schools decided to do battle for the Shield 4 years ago all of the matches have been very tight indeed and this year proved to be no different.  A novel format whereby 2 foursomes matches contested the front nine ended all square, with both teams recording a point each.  The back 9 holes were played as singles matches with 5 points at stake.  Scott Ballentine got a point early on with a victory for The Academy but Eamonn McAleer responded with a win in his game to make the tie level.  Jordan Hyland then fought out a very tight match with Harry Evason which went down to the last green with Jordan just edging home to score another point for CBS.  Sean Monan scored a good point for the Brothers boys before the final match ended all square, making the final score 4.5 to 2.5.  In what has become an eagerly awaited and coveted tournament, excellent play and great sportsmanship were the order of the day… and some bragging rights for a year!

On Thursday 15th June up to 40 junior golfers from the CBS took part in the Conall McCrory Memorial tournament.  The weather held up well and Omagh golf course was in magnificent condition for all the players who took part in both the 18 hole and 9 hole competition.  In the end CBS golf captain Jordan Hyland emerged victorious with 37 Stableford points, just piping Jack Darcy  on 36 points.  Jordan was delighted to have won the fantastic replica Claret Jug, donated by Conall’s parents Ciaran and Mary for the tournament winner.  Jordan played with and against Conall many times in the past at all levels and it was fitting that he should claim the crown of ‘Champion Golfer’ on this occasion. 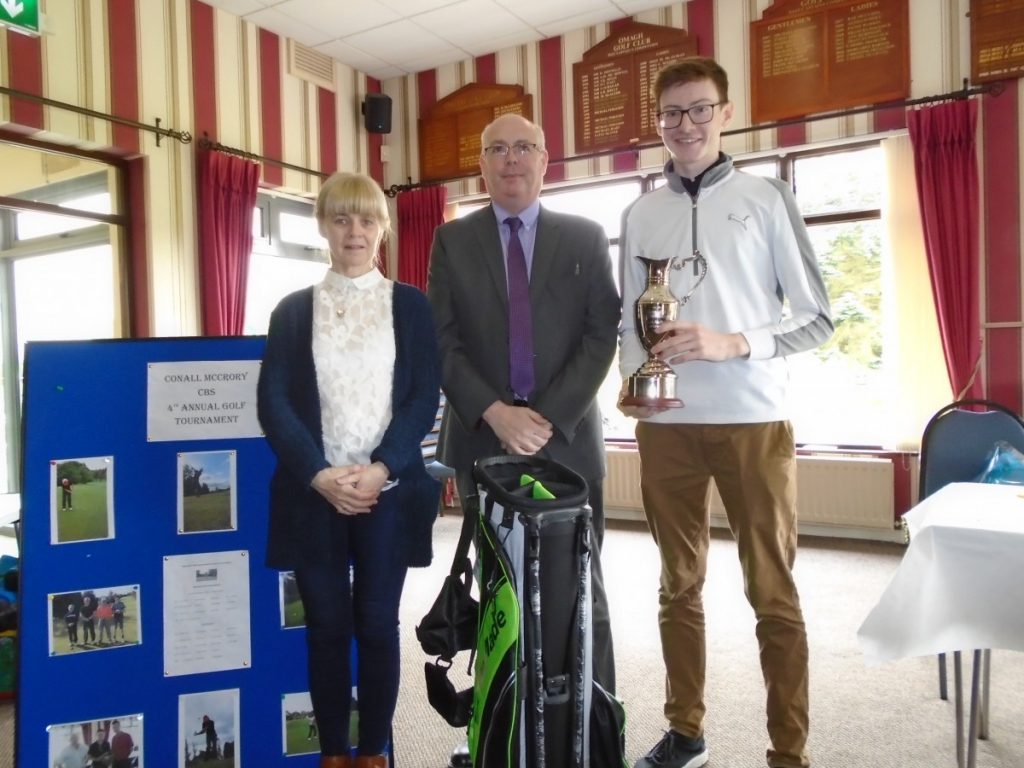 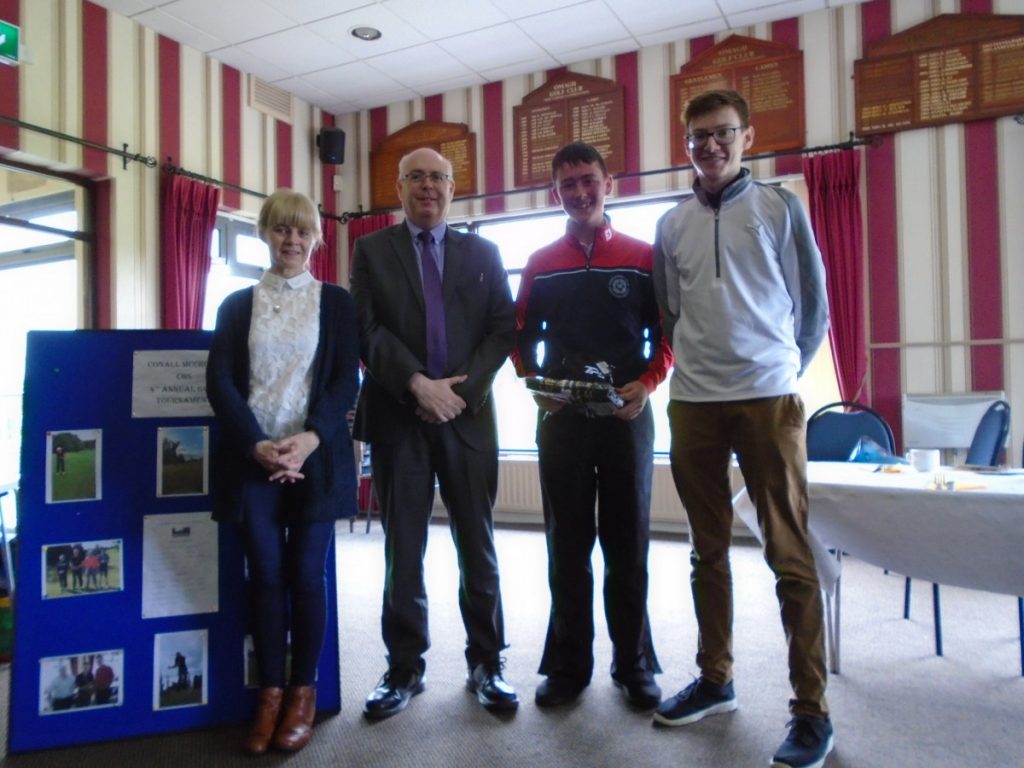 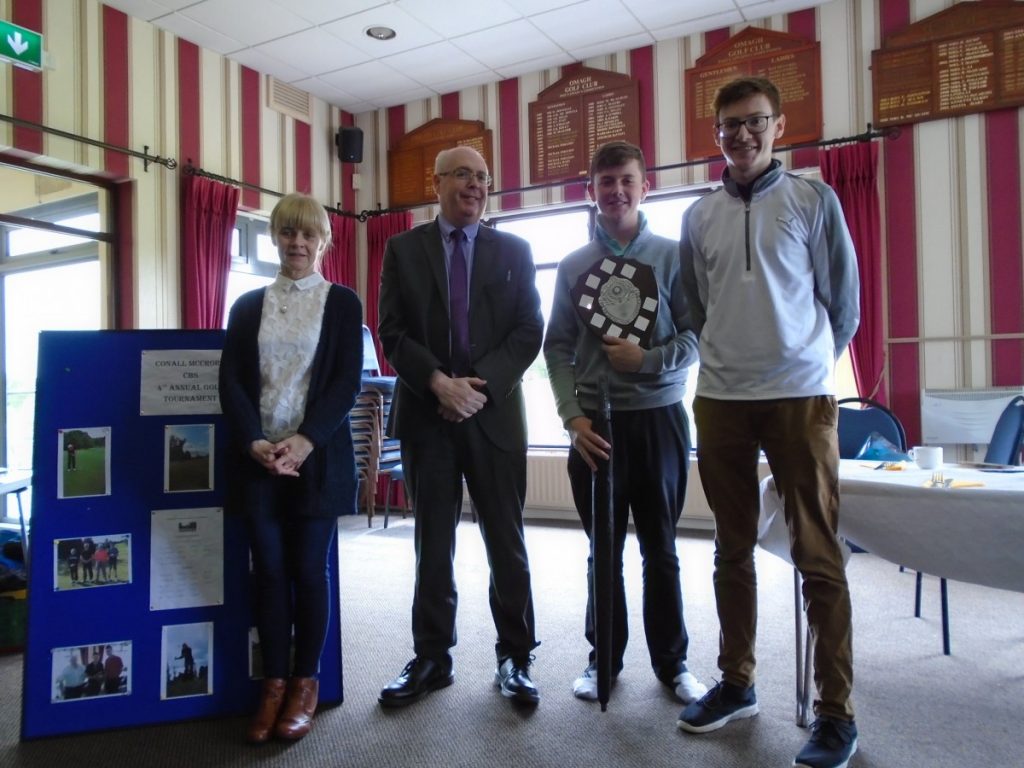 The prize giving ceremony finished off with a delicious meal and the pupils presented a cheque to Conall’s parents for their charity work with money raised by them for the tournament.

The full list of winners can be seen below.

Omagh CBS retained the coveted Passmore Shield with a narrow 7 games to 5 victory over Omagh Academy at Omagh golf course on Thursday 29th September. This is the 3rd year of the competition which had been started up again to help promote junior golf in the area in honour of the late Peter Passmore.

The match was played in a great sporting manner and the standard of golf was excellent. In the morning foursomes the CBS gained a narrow 2.5 to 1.5 lead but all the matches were very tight indeed.   Conor Byrne and Jordan Hyland did well to hold off Scott Young and Scott Ballantine while the Academy’s Harry Evason and Charlie McKinney held on to score a point for their team. Luke Hamill and Joel Smyth gained another half point for the Academy as they played out a thrilling half match with Jack Darcy and Sean Monan. In the final match Academy pairing of Katy Ballantine and Emma Job pushed Jacob Corry and Sean McGowan all the way before narrowly losing out.

In the afternoon singles again the play was of the highest quality with Eamonn McAleer squeezing out a half point for the CBS in the first game out. All 8 singles matches hung in the balance right up until the end with Charlie Donnelly’s fight back from 2 down with 2 to play, securing the match for the CBS with a half point. 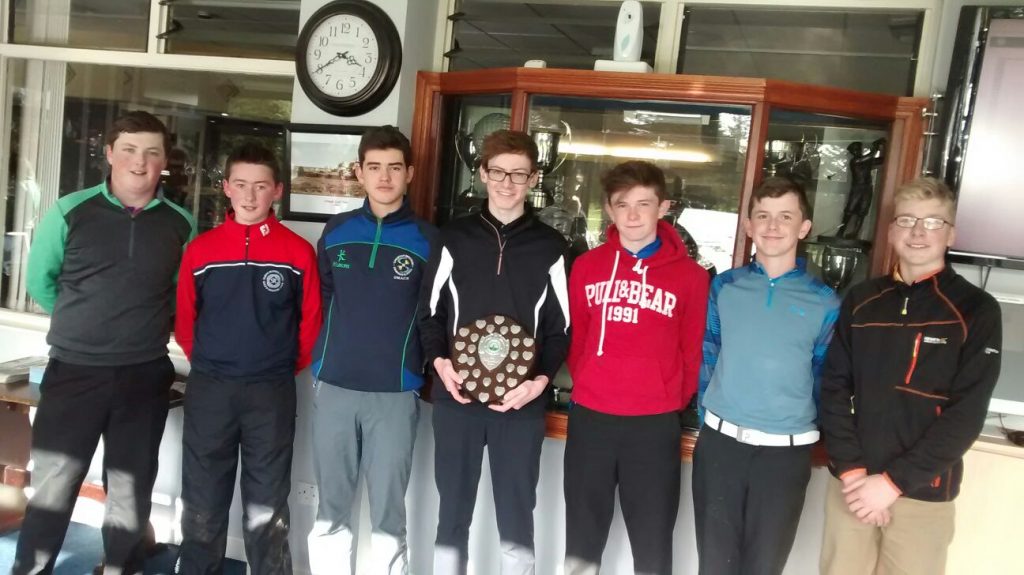 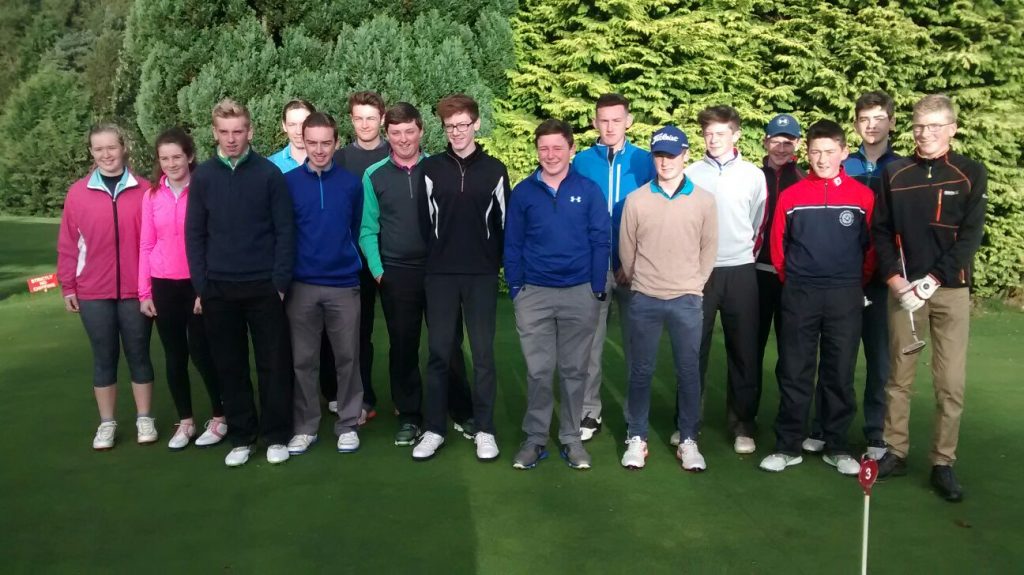 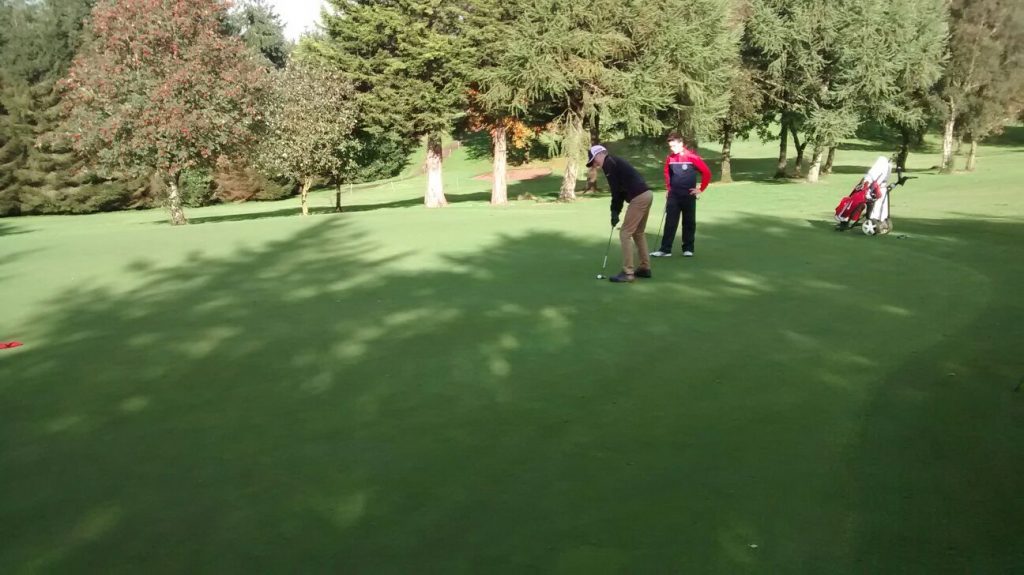 Sean Monan lines up his putt

Omagh CBS won the shield back after an emphatic victory in the morning foursomes followed by a fine performance in the afternoon singles match. Captain Eamonn McAleer was delighted to lift the shield for CBS. 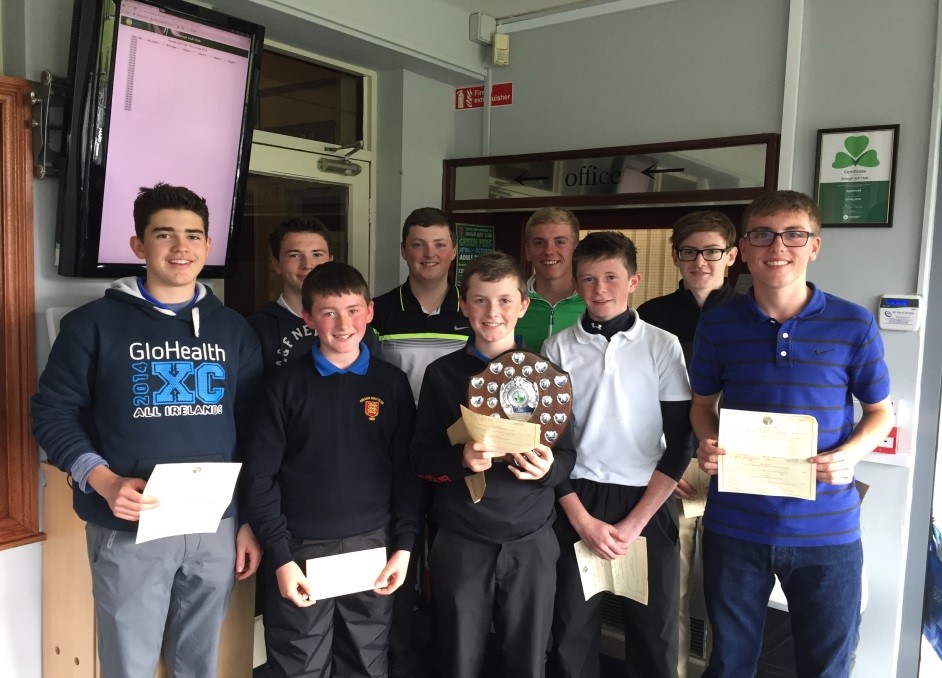 Omagh CBS team of Sean Monan, Gareth McCrystal, Jack Darcy and Conor Byrne came 5th out of 28 teams at the recent Junior Championship on an excellent course in Tandragee. 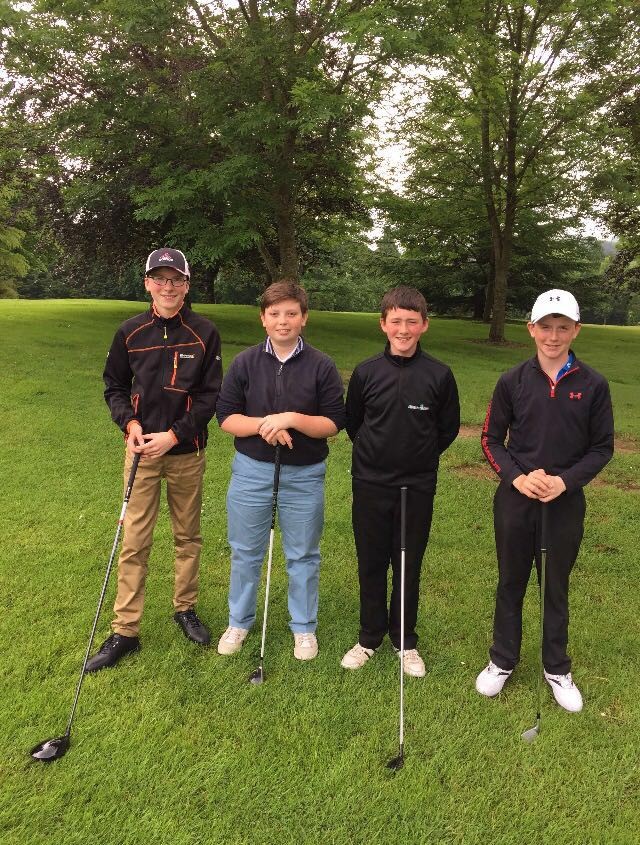 The Inaugural Conall McCrory Memorial trophy, a magnificent replica of the famous Claret Jug, kindly sponsored by Conall’s parents was won by Sean McGowan with an incredible score of 42 points. 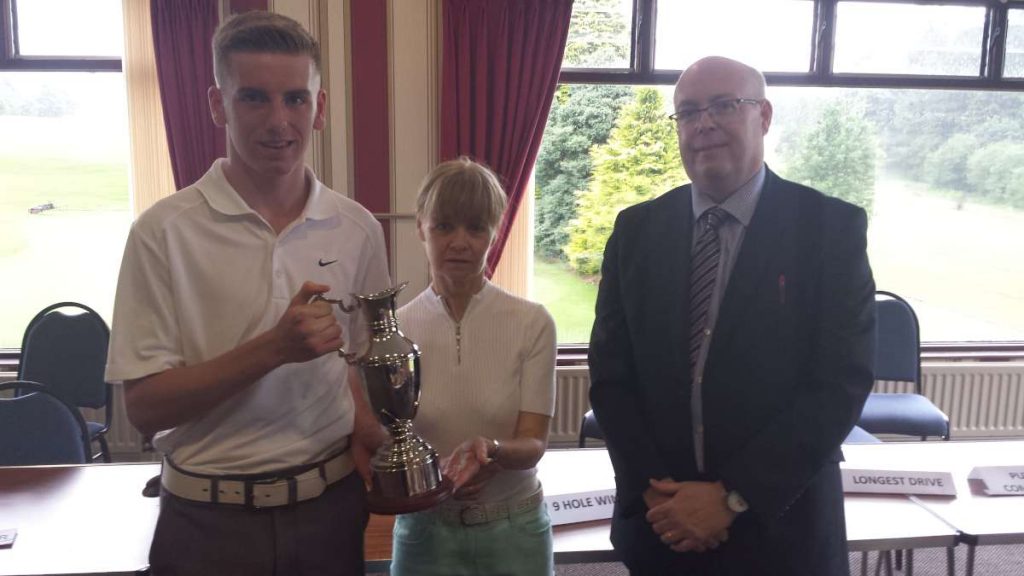 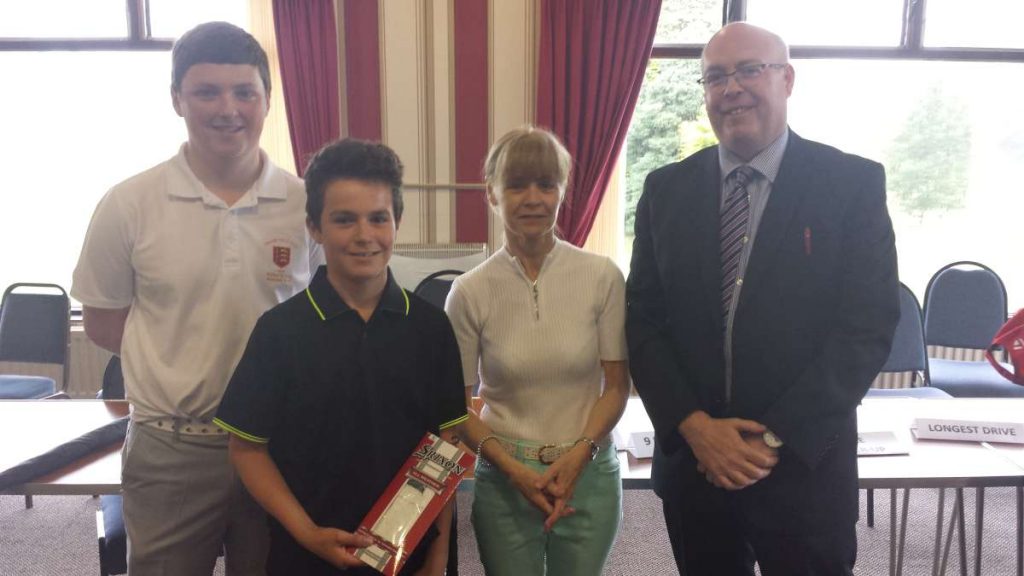 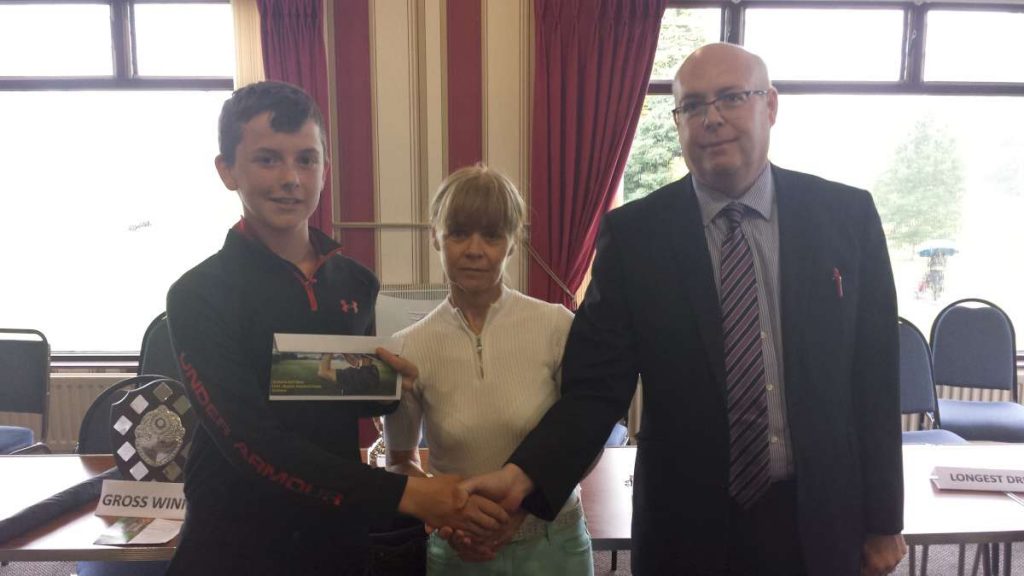 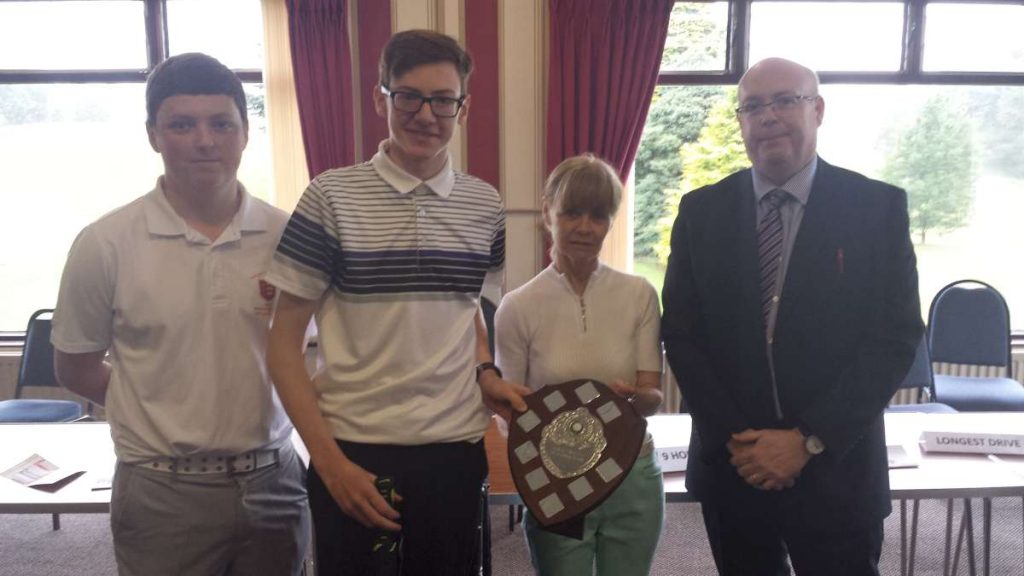