On Thursday 28th February we brought together the surviving members of the 1974 team that ‘broke the glass ceiling’ and brought the MacRory Cup to Omagh for the first time. During this reunion event we also had many of the 1973 team who narrowly lost the MacRory final and provided the platform for the famous victory a year later. 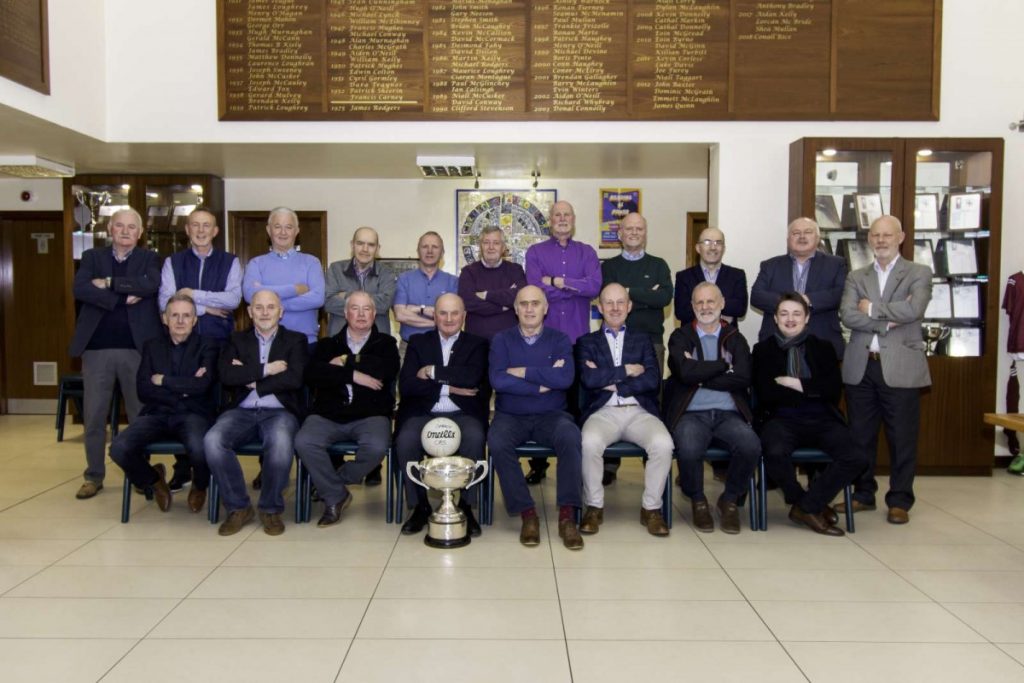 The event began with, organiser, Mr Des Maginness adding some social context to the team’s achievement. Through his research he identified the Ulster Herald of March 30th 1974 reported;

The fact that GAA activities were able to occur against such a backdrop of constant mayhem is a testament to the resolve of the Gaels of West Tyrone at this time. He also paid tribute to the work of staff in ensuring that normal activities could continue for pupils.

Mr Maginness went on to claim that the ultimate victory of 1974 would not have been accomplished without the MacLarnon victory of 1971 that allowed the school to enter the MacRory competition or the groundwork being laid by the experiences of the 1973 team.

After recalling extracts from various media outlets on the semi final victory over a fancied St Patricks College Cavan, the final victory over reining champions St Michaels, Enniskillen and the agonising defeat in the Hogan semi final to the boarders of Gormanstown College Mr Maginness spoke of the legacy created by this group of players.

“As a staff member of over 10 years one can not but help notice that the surnames have stayed the same. The contributing clubs of West Tyrone over the years have remained the same in many ways as well, although I can’t remember any Killeeshil players in my time at the school.

The brevity of life is evident when one undertakes an exercise such as this. Indeed, there direct legacies with the 1973 and 1974 teams as:

The fresh faced faces of 17 and 18 year old boys in 1973 and 1974 without a care in the world would one day change to the faces of men moulded by the experiences that life can give, many with children of their own who were now fresh faced 17 and 18 year old lads. Indeed, From the 1973 team Cathal McCarron, son of Martin, won a MacRory Cup medal in 2001, Shane O`Neill son of Oliver won a Hogan Cup medal in 2007 and from the 1974 team Shaun O`Neill, son of Liam, won a MacRory medal in 2005.”

“They, and their team mates, have played their part in putting their shoulder to the wheel and helping to ensure that the foundations were laid for Omagh CBS to go on and win 3 more MacRory Cups, one Hogan Cup and 30 more Ulster Colleges titles since 1974.”

Chair of the Board of Governors, Mr Paddy McMahon, brought the players back to when they were fresh faced 18-year olds by testing their memory of key events from the year of 1974. After rolling off significant events and figures from that period Mr Mahon spoke of the significance of the 74 teams’ victory for the school and how they had inspired all those who came behind them to emulate their achievement.

Chairman of the Ulster Colleges and teacher at the school during the Year of 1974 Mr Seamus Woods then approached the podium to speak. Seamus pointed out many contrasts and comparison with the current era and that of 1974. The most notable being the current school enrolment of 970 pupils to that of a mere 4-450 of 1974. He also made reference to the changing face of the game. In 1974 Omagh CBS arrived for a MacRory cup final with a squad of 19, the previous weekend the CBS had faced a St Patricks, Armagh squad of 47 in their semi-final fixture.

Seamus continued to talk about how the team blessed with exceptional players in strategic positions, supported by a group of dedicated foot soldiers claimed their crown with a stunning semi-final victory over ‘hot favourites’ St Patrick’s Cavan on a score line of 8 points to 7.

Mr Woods referred to the importance of Gaelic football in providing players with many valuable life assets, such as coping with adversity and working towards improvement. This group, like so many others that have passed through the school, learned those lessons on the training and playing fields.

Captain Colm McAleer and midfield pairing of Eugene McKenna and Gerry McCallen came to the front in a chat show esque style to recall their memories under the prompting of ‘host’ Mr McMahon. The mic was then sent round the room with valuable and comical offerings provided by other members of the squad.

School Principal Mr McConnell finished the evening by thanking the squad for setting a standard for future pupils to follow and presented each player with a framed team picture.

The 1974 MacRory Cup team have collected a substantial amount of money, including donations from local businesses (see below), which they wish to donate to the Northern Ireland Air Ambulance; on behalf of themselves and the school.