I thought the school ski trip was an unbelievable experience and would’ve happily stayed for a couple more weeks. Everyone in the group got on great, and it was class how you got to know and chill out with so many people from different schools. The worst part of the trip was the journey home. 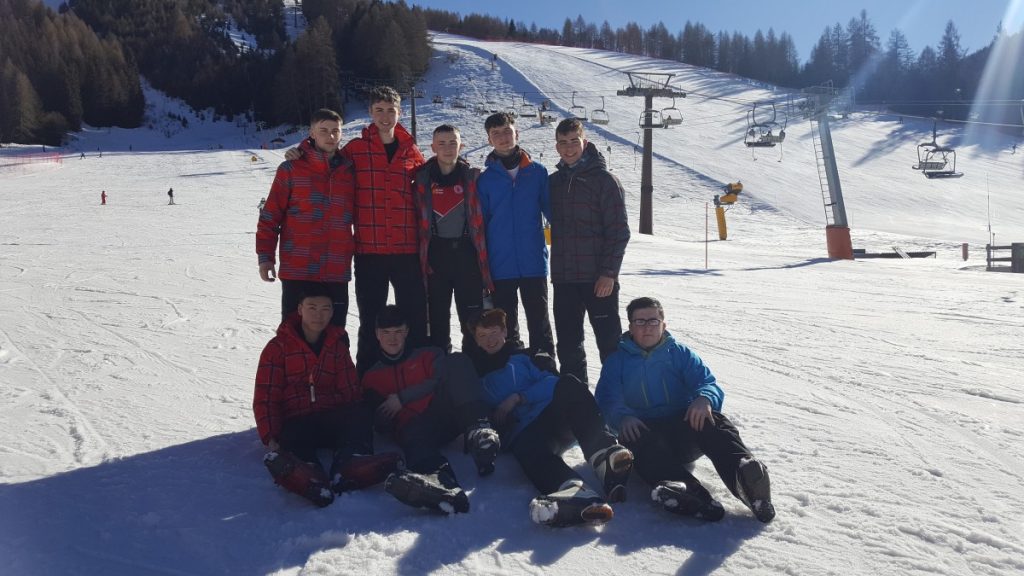 Having went skiing before, there was no chance I was going to miss this trip – I would take it over a hot holiday any day. But to anyone who has never been skiing, this trip is an experience that you shouldn’t miss.

After arriving at the school at 1:30 am., we got on the bus and headed to Belfast Airport. Everyone was buzzing for the flight out at 6.00 am. No trouble through airport, with teachers taking care of passports, etc. On the plane the tiredness started to kick in, most people sleeping/dozing on the way over.

Quiet journey from Verona (airport we flew into) to Folgaria, with some people sleeping but others chatting. After a while, I wasn’t sure if there would even be snow here, as we couldn’t see any snow for most of the journey (total journey: about 1hr 15mins). However, sure enough we turned off the main road and started climbing up. Little snow in the actual village, but we could see that further up the mountain there was a good bit.

First day was a bit of a drag, probably because we were all so tired. On arrival at the hotel we had a big lunch, nicer food than I had thought. Hotel staff were nice too, giving out seconds this day probably because we looked like a hungry pack of wolves. The rest of the day was spent sorting out rooms and completing the ski fit so that we could hit the slopes straight away the following morning.

The hotel was a 3 star (Park Hotel Miramonti), and – like the food- was way better than I expected. The rooms were quite big, it was clean and looked fancy enough. Each of the schools were spread across different floors

A lot of the meals on the trip involved pasta, we were in Italy after all!!. However, soup, pizza and sometimes chips accompanied most meals.

On day 2 we woke up feeling much better. We got a longer sleep-in that day as it was a Sunday, (the busiest day on the slopes and we wanted to avoid the initial rush given that the majority of the group were ski novices). After breakfast we got in the bus for the 10min journey up the mountain. After collecting our skis at the bottom of the slope we walked over to the ski school. We had 2 hours of lessons from ski instructors from 11am to 1pm, then a 2 hour lunch, then 2 more hours of lessons. The groups were sorted by ability, with most people in beginner, with there being only one intermediate and one advanced group.

While I had skied before a few times our instructor helped us along a lot, not pushing us to do too much too soon, and making sure we were all capable before advancing on to the more difficult slopes. Our “lessons” were quite informal, as you basically just ski along and the instructor gives you tips.

Other groups would have done more exercises/drills, especially those who hadn’t been skiing before, to help show them the ropes. The instructors helped out anybody that was struggling, and sometimes if a skier progressed faster than the rest of the group they were moved up to a more advanced group.

Lunches were included in the trip price, and you had plenty of food to keep you going. There was water on the table, however if you wanted coke or a soft drink in the café it cost 2,50 euro (In the shop back in the town where our hotel was everything was much cheaper – about 50c for the same can). We were able to go to the supermarket after we got back to the hotel each evening.

While those not accustomed to much exercise or those that were learning were glad of the lengthy lunch break I and some others found a 2 hour lunch was quite long and longed to get back out on the slopes. After the first few days we were allowed to practise on the nursery slope beside the café after we finished lunch, giving us just over an extra hour’s skiing. For skiers in the advanced group this may sound boring, but we were able to practise some things we had learnt in our lessons – such as backwards skiing and 360 rotations.

As the week progressed all groups could ski on red pistes (medium difficulty). Excluding the first day, our lessons started at 9.00am, meaning a 6.30am wake up call for a 7.00am breakfast.

Each evening there was an activity organised for everyone to take part in. This helped us mix with other schools (some of the ski groups – like mine – were also mixed) and get to chat to students we didn’t know. Some of these activities included tubing (sledging in an inflatable ring basically), quiz night, pizza night and a trip to the cinema.

As I said at the beginning, you shouldn’t miss this trip as it is likely to be the best school experience you’ll have!!