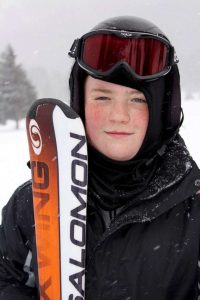 It was 5.25am when the bus pulled up. I was so excited. I nearly broke the door I opened it that hard!! We loaded up all the suitcases and of we went to Belfast. The journey to the airport was an hour and a half but I slept most of the way because I was up so early. After we went through security the teachers said we could go and get some breakfast. After about two hours we were lifting of on a two-hour journey to Italy. I woke up suddenly and we were landing I must have fallen asleep. Then we got on another bus for two and a half hours up the mountain to our hotel.

We were in the hotel only 5 minutes when we had to go get our ski boots and helmets. Mr. Morris announced we had to get up at 6.30 to be in time for our skiing. We went to bed at 10.00 as we knew we had to get up so early.

I heard a knock on the door it was Mr. Morris telling us to get up and dressed in time for breakfast. We got on another bus to get to the ski resort, we got our skis and poles and went out to the beginner slopes. After we were split into groups with instructors’ (mine was Michael). The first 2-hour session we learned to snow plough down the beginner slope. Then we went for lunch while the other schools were skiing. After lunch we learned how to turn and go faster.

On the second day Michael took us up to the blue slopes and I was terrified on the ski lift. First, he took us on a slope through the forest and I didn’t fall so I was happy. Then we went up again on the bigger blue slopes and I fell at least 5 times!!! After lunch I switched to Tom’s group and did the forest trail 4 times. On Tuesday we did the bigger blue’s and I didn’t fall once and I was happy with myself.

On Wednesday we went half way up the mountain and did all the slopes there. Then on Thursday Tom told us we were going the whole way up the mountain. We went down our first red slope and I was nervous of falling but thankfully I didn’t, however my legs were sore from skiing so much. It was our final day of skiing on Friday and there so much snow with bumps everywhere. This made the skiing a little trickier. In the afternoon session we didn’t have to go out because there was so much snow and visibility wasn’t great. I wanted to get the most out of my last day so I decided to go out. On some slopes there was snow up to your knees making it very hard to ski. I fell so many times and my legs were on fire because you had to have so much control. On the Saturday we woke up to three feet of snow, but we got to the airport safe and got back to the school at 5.30pm.

There were also some evening activities like a disco at piano54, which we went to twice, and a pizza night. Most other evenings were spent exploring the town or just relaxing with friends at the hotel.

In conclusion I really enjoyed the trip and would go back in Year 13 if given the opportunity.