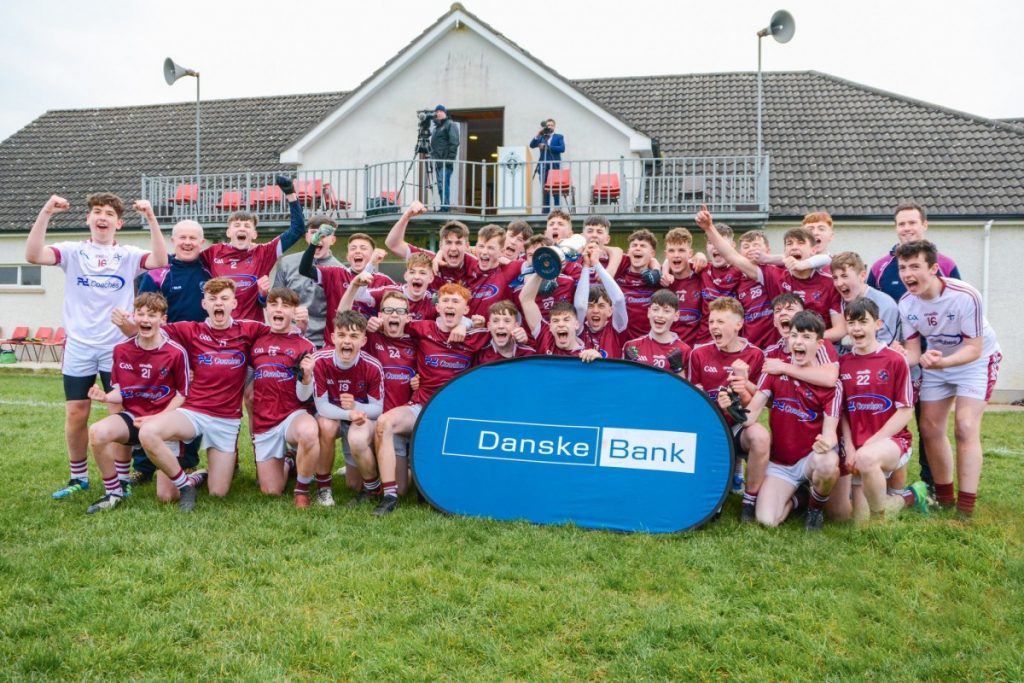 Omagh CBS upset the formbook at Oliver Plunkett Park in Emyvale on Friday afternoon when they edged an entertaining Danske Bank Brock Cup final.
Cavan may have scored more times than their opponents but crucially the winners bagged two goals with the second one a fortunate score that gave them an advantage that they were never to lose.
They trailed by a point at the beginning of the final quarter when a speculative ball in from the left wing bounced over the head of Cavan keeper Cian Donohoe and into the net.
To their credit Cavan battled to the final whistle but Omagh managed to hold on to take the honours. The winners’ captain Conor McGillion led by example throughout with his second half goal giving the Tyrone lads a massive lift when it was really needed.
Sean O’Donnell was another player who stood out for Omagh in a good all round team display, the centre half forward finishing with 0-5 to his name. Prematch favourites Cavan played their part in the decider and no more so than outstanding centre half forward Emmanuel Shehu who weighed in with seven points off both feet.
With the wind at their backs the Cavan lads were out of the traps quickly with Shehu on target from a free as well as from play before wing half back Kevin Lovett hit a brilliant point from distance.
O’Donnell opened Omagh’s account in the 11th minute before midfielder Patrick McCann cut the deficit to the minimum. Cavan though were looking the better side with Conor Casey and Shehu tagging on points but they were dealt a blow when they lost full forward Casey to a black card.
O’Donnell had the final say of the half when he turned sharply to split the posts to leave it 0-5 to 0-3 at the interval.
Shehu landed two superb points with either foot inside six minutes of the re-start and with a fine score from Ethan Coyle sandwiched in between it looked as though Cavan were going to establish a match winning lead.
Omagh though had other ideas and in the next attack Conor Bradley placed McGillion who finished low to the bottom corner of the net past Donohue. The same player then kicked a great score from out on the left wing and all of a sudden Omagh CBS were right back in contention.
Ben Monaghan steadied St Patrick’s with a point but that score was cancelled out by O’Donnell before Hayes got that crucial second goal. Darragh Lovett and O’Donnell exchanged points before a Shehu free left the minimum between the sides going into the final ten minutes.
O’Donnell and Lovett swapped points again before McGillion left two between the sides with one minute of normal time left to play. Shehu closed the gap again but despite eight minutes of injury time Cavan couldn’t find the equaliser in a contest that they finished with fourteen men after keeper Donohoe was sent off.

From Kevin Kelly in Emyvale