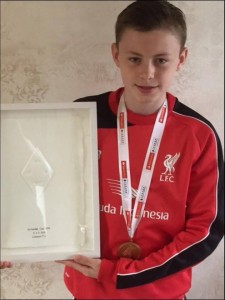 For many kids, the final few days before returning to school after the Easter break can be spent lounging around at home, getting up late and spending most of the day on a Playstation. Not so for Maiden City SoccerU13 player Conor Bradley who spent this past weekend at Borussia Mönchengladbach’s training facility at Borussia Park with the famed Liverpool Academy, taking part in the 6th annual Santander Cup.

Playing against European giants including PSV Eindhoven, FC Köln, Bayer Leverkusen and for the second time in two weeks Catalan superpower Barcelona, Conor played every minute of the four games on the right wing where his talents were utilised with great effect in wins over PSV and FC Köln.

Now in its 6th year, The Santander Cup is a high class youth invitational tournament sponsored by the Santander Consumer Bank group in association with Borussia Mönchengladbach which attracts some of Europe’s elite talent. Along with the afore mentioned teams, “The Old Lady” of Italian football Juventus and Spanish lions Athletic Bilbao were also present at the tournament.

A committed player since joining Maiden City Soccer in the Summer of 2015 from Castlederg side St.Patrick’s, Conor travels from Castlederg twice a week to Lisneal College to train with his teammates and routinely travels to Liverpool’s Academy facility at Kirkby to join in with its training programme that has produced the likes of Phil Thompson, Robbie Fowler, Michael Owen and Steven Gerrard.

Conor’s performances throughout the tournament resulted in him being voted Players’ Player of the Tournament.