The Cumann Dramaíochta of Christian Brothers’ Grammar School were part of an enjoyable night of Irish Drama and Music organised by Kevin Goodwin, Irish Language Officer with Fermanagh and Omagh District Council on Thursday 26th May. 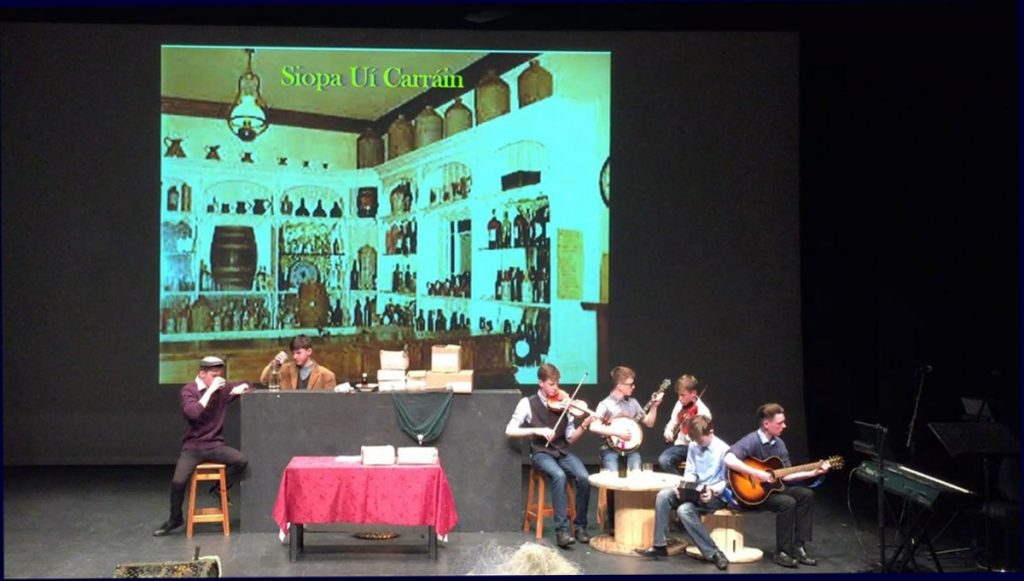 The members of the Cumann Dramaíochta are all past pupils of the local Gaelscoil na gCrann and enjoy the opportunity to combine their fluent Irish skills and their acting skills together in such a positive way.

This year’s production involved another step back into recent history. Their teacher Emma Pearson wrote the play inspired by a piece of her own family history. Her grandmother was from a small island off the coast of Mayo named Inishkea and like many island and coastal communities the people relied upon fishing to sustain these small isolated localities.

In October 1927 a group of local men went out fishing in the seemingly clear calm waters of the Atlantic but a sudden violent storm arose and tragically 10 islanders were drowned, a young boy amongst them.

The play is set in the small shop/pub on the island. Louis McCrory played the role of Tomás, the eldest son of the family. His father Pádraig was played by Oisin Kelly. Seán, a neighbour and friend of the family was played by Cahir Turbett whilst Oisin Reid assumed the role of Liam, another islander. Mícheál Mac Salaigh was the narrator of the play and set the sombre tone from the offset.

Whilst the predominant tone of the play was forlorn and sad, the young actors managed to skilfully carry the plot without the inevitable tragedy at the end overwhelming the entire performance. The lively céilí scene was made all the more joyous by the presence of hugely talented musicians Aidan Kelly, Donal Kelly, Conan Whitley, Manus Doyle and Sean Diamond. Their lively and unique rendition of Ormond Sound brought an upbeat and buoyant atmosphere to the scene.

The use of multimedia and in particular the images of stormy waves whilst the actors yelled from offstage made the drowning more real and harrowing.

Oisin Kelly’s final monologue as the bereft father was hugely powerful and brought home to the audience the reality of life in coastal Irish communities throughout the centuries. Mícheál Mac Salaigh’s summation at the end highlighted an era in our recent history when island communities had to abandon their homes and relocate to the mainland. However, they didn’t abandon their histories and their stories and they remain as alive today as they were 90 years ago. The Gaeilgeoirí of Omagh CBS are living proof that the rich heritage of language that those islanders held so dear continues to thrive amongst our young people of Tyrone. 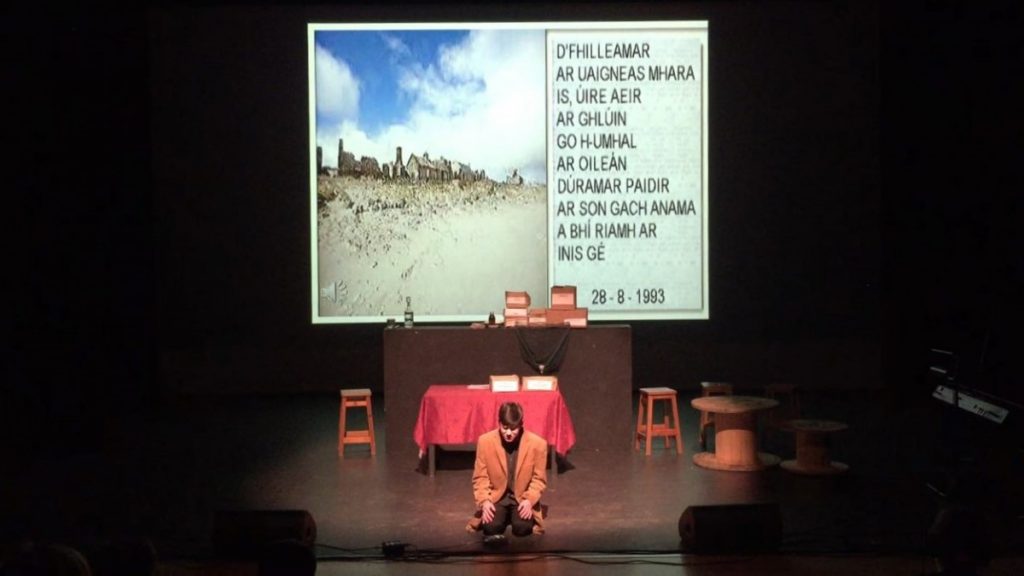