“Sounds for a Spring Evening” bursts with life and joy on the Strule stage!

They say March comes in like a lion and goes out like a lamb, but this wasn’t the case on the stage of the Strule on the 28th March this year! There were lionesque roars of approval and amazement from the audience at the sheer vitality and wonder of every performance witnessed at the Christian Brothers’ Grammar School’s musical showcase extravaganza!

Masters of Ceremony for the night was the ever reliable and engaging Mr.Dominic O’Hara and the charismatic Head Boy Lorcán McBride. The perfect duo of confidence and poise.

The concert opened with a string quartet who would rival anything heard in Carnegie Hall. Scenes from “The Four Seasons” by Vivaldi was masterfully executed by Eddie Cassidy, Paul McKenna and brothers Aidan and Donal Kelly. This popular classical piece was a fitting opening for the appropriately named Spring concert. 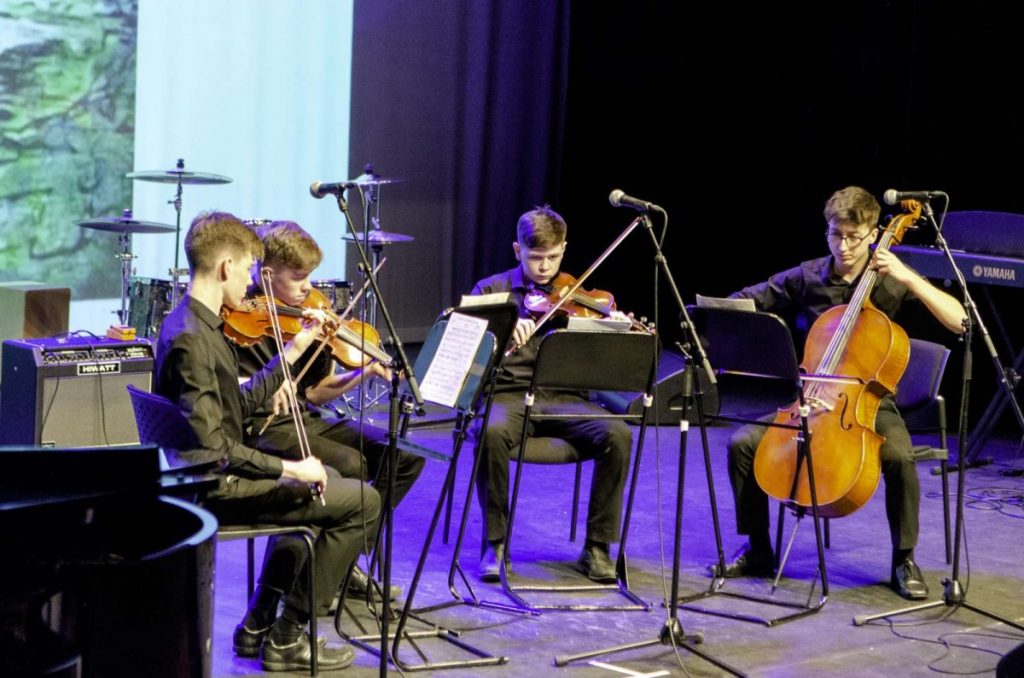 This was followed by over 130 Year 8 pupils taking to the stage for an extremely engaging rendition of Toto’s Africa. The piece began with a meticulously choreographed stylised soundscape to emulate rainfall performed by every Year 8 pupil. This auditory masterpiece was so perfectly synchronised under the wonderful guidance of the amazing ladies in the CBS Music department; Mrs.Geraldine Fretigny and Mrs.Aisling McCourt. 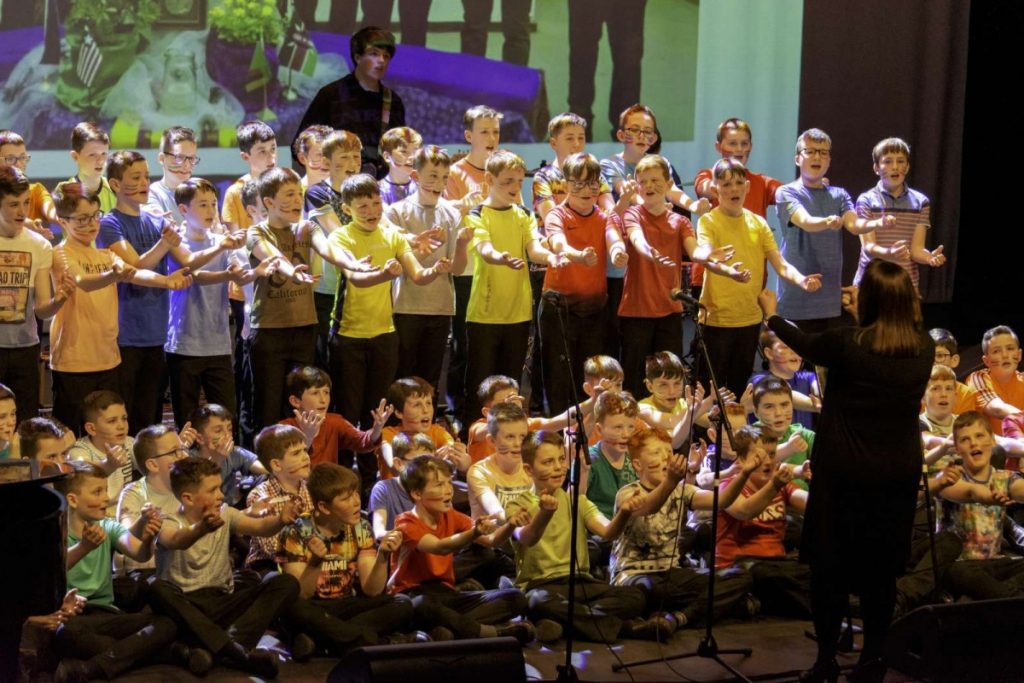 In a comedic introduction, Mr.O’Hara was humorously “fired” by Finn McMorrow who appeared in a Lord Sugar mask to introduce the next performance of the recognisable theme music from The Apprentice. A masterful piano duet of Capulets and Montagues from the ballet Romeo and Juliet was performed by the extremely capable Shea Mullan and Oran Rodgers.

A change in style followed with Conor McCann, James Webster, Cain McGuigan, Joe Curran, Ronan Cassidy and Oran Rodgers took to the stage to give a rousing performance of the 1970s classic Mr.Bluesky.

A change of pace again saw the junior traditional group take to the stage under the tutelage of Mrs.McCourt, with a toe-tapping selection of traditional Irish pieces. For many of these young musicians it was their first time performing to a large live audience but there was certainly no sign of nerves as they captivated the audience with their joy in all things trad! This was followed by another junior group; this time the junior wind ensemble took to the stage to provide a very animated performance of George Ezra’s Shotgun.

John McGlinchey’s beautiful trombone solo of Aker Blik’s “Stranger on the Shore” brought a mellow atmosphere to the auditorium and the mellowness continued with a performance of “Your Song” sung by Conor Boyle in his final year of performing for CBS and accompanied by Oisin McGuigan, Manus Devine and Eddie Cassidy. The hugely talented Paraic Hurd took to the stage for his first appearance of the night performing a haunting guitar solo of The Beatle’s Blackbird.

CBS are extremely fortunate to count Mr.David Robertson amongst their peripatetic music teachers and over the years he has provided vocal training for a huge number of aspiring singers. Mr.Roberston and Breannain Collins assumed the guise of Andrea and Matteo Bocelli as they were accompanied by a joint pupil and staff choir in a very emotional performance of “Fall On Me.” The stage backdrops for this song linked the strong family theme of this song and featured cherished relatives of members of staff who instilled a love of music in their children and grandchildren.

The curtains dropped for a few moments as they were raised to an orchestral extravaganza as 60 students (featuring over 30 acoustic, electric and bass guitars!) performed a hugely memorable arrangement of Seven Nations Army. This was an original arrangement composed for a strong orchestra by the music department staff. This powerful performance closed the first half and certainly raised the levels of excitement in the audience in anticipation of what the second half could possibly reveal!

The curtain raised in the second half with over 130 Year 8 students taking to the stage again. They have been studying rhythms, ostinatos and melodies related to Andean music. This culminated in an amazing performance of Floreo de Llamas featuring tin whistles and a variety of percussion instruments. A quick turn over saw a popular Gortin lady take to the stage. Mrs.Sinead McLaughlin gave a truly beautiful performance of Collin Raye’s “Love, Me.” This was followed by GCSE Music student Sean Monan perform a delightful guitar solo of “Evergreen.” A change in tempo saw Breannain Collins, Oisin McGuigan, Paraic Hurd and Odhran Winters perform the toe-tapping “Sweet Home Alabama.”

The hugely talented Senior Trad group features county, provincial and All-Ireland winners and their performance of a variety of trad pieces was accompanied by a surprise appearance of 4 Irish dancers; Eoghan McKenna, Shawn McGovern, Tom Lannon and Barry Teague. The synchronisation of dance and music was a powerful combination and certainly a talking point of the night.

Tears flowed backstage and in the audience as Oran McNabb and Andrew Dolan gave an extremely captivating performance of “A Million Dreams” from the iconic movie The Greatest Showman. Watch out Hugh Jackman, these two young gentleman are coming to steal your thunder!

Patrick McCabe, the CBS answer to the man in black, took to the stage accompanied by Sean Monan, Tiarnan Donnelly, James Webster and Ronan Cassidy to perform Johnny Cash’s Folsum Prison Blues. The charisma from Patrick and his GCSE classmates was truly electrifying and had the audience joining for the sheer joy of the performance. 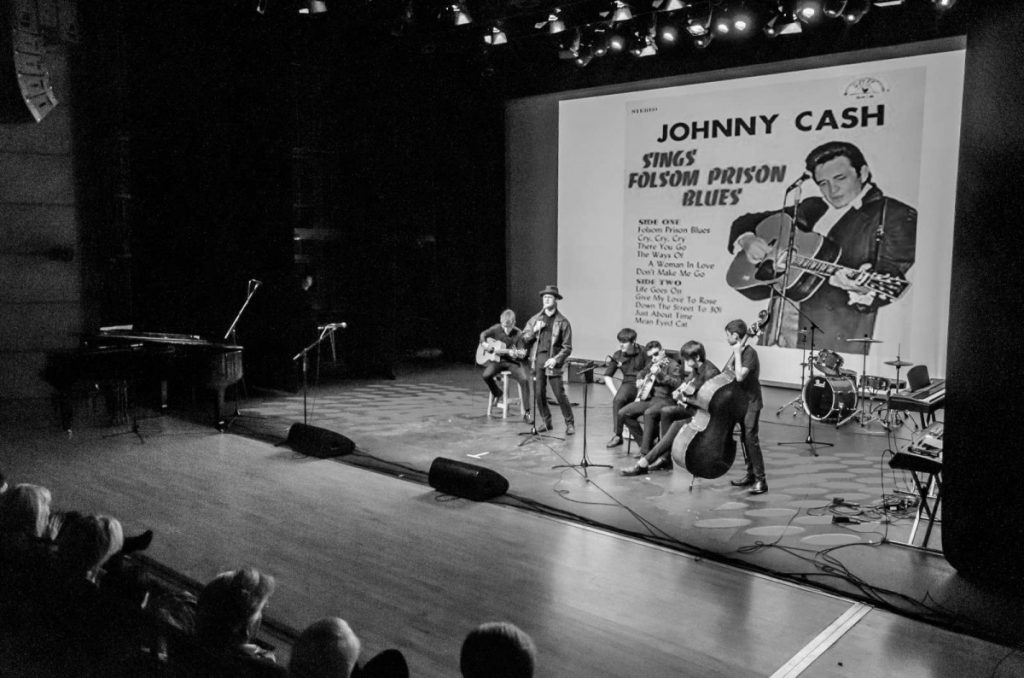 Words cannot describe how Conor McCann captivated the audience with his ability to play piano and harmonica as he sang Billy Joel’s “Piano Man.” As a Year 10 student, the skill he displayed was beyond his years. Conor McCallion , a charming and talented guitarist who accompanied numerous performances throughout the night took to the stage next to perform a beautiful guitar solo of “Ravel.”

The Las “There She Goes Again” was given a whole new lease of life by the joyous Paul Eanetta, Andrew Dolan, Jack Kennedy, Conor McCallion, Ronan McGuigan and Eunan Campbell.

The closing performance saw the senior and staff choir come to the stage to perfectly execute possibly one of the most challenging songs ever written, namely the iconic “Bohemian Rhapsody” by Queen. Harmonies skilfully arranged by the music department, with Mr.Robertson on piano and a truly amazing guitar solo by Paraic Hurd had the audience joining in once more as the crescendo built up to a frenzy and the Sounds for a Spring Evening came to a close.

CBS Principal Mr.Foncy McConnell took to the stage to express his gratitude to all the pupils involved. Presentations were made to Mrs.Fretigny and Mrs.McCourt the musical directors, and to Mrs.Pearson the producer. Mr.McConnell shared his awe with everyone present in the building that night at the sheer breadth and skill of musical talent amongst the pupils in the school. No event of this magnitude could possibly fall into place so seamlessly without a huge team effort behind the scenes. The staff of CBS Art department devoted time to selecting beautiful pieces of current and past pupils’ artwork to adorn the backdrops. Mrs.McCrory and her Journalism pupils worked tirelessly on producing a beautiful programme. Countless members of staff helped with administration, supervision, stage management and Front of House to bring together a truly memorable Spring evening.

In a surprise reprise Mr.McConnell handed over to the wonderful duo of Breannain Collins and Oisin McGuigan who led pupils and staff in a tribute of gratitude to their wonderful Music teachers Mrs.Fretigny and Mrs.McCourt with a beautiful performance of “Let It Be.”

Hans Christen Anderson said “Where words fail, music speaks.” It is safe to say that words certainly failed to fully express the amazement of those who witnessed the sheer talent and joy in music the boys of CBS displayed on stage. The memories of this concert will certainly live on in their memories for decades to come and if “music speaks” then it shouts out loud that the talent of the young men of CBS Omagh was expressed in volumes more numerous than those of Shakespeare. Thank you boys for sharing your musical talents. You were all amazing.

Click here to see all the photographs taken on the night.