With his passing, Dominic O’Hara’s loss to his family and friends, and to the Christian Brothers’ Grammar School Omagh’s staff and pupils, past and present, was enormous. Not only was he a member of the Religious Studies Department; he was a dedicated, witty and loveable part of all aspects of school life, to which he brought his own unique energy.

Dominic was an alumnus of St Peter’s High School, Derry (1973-78) and St. Columbs’ College Derry (1978-80). Before he was a teacher, Dominic worked as a Production Trainee Manager in a shirt factory in Derry, as Assistant Manager at Olympic Sales Bundoran and as a Sales Representative in Donegal Town. His witty stories and observations of those times would provide a great source of entertainment to those fortunate enough to hear them. Dominic graduated with a BA Religious Studies and Education from De La Salle College, Manchester University in 1984 and obtained a PGCE in Religious Education, Economics and Drama from Queens University Belfast (1989-90) He taught at St John Fisher School, Chatham, Kent from 1990-1993.

A native of Derry City, Dominic was the youngest of 6 children raised by Molly and Johnny O’Hara in Patrick Street. He had no problem joking that he was ‘a wee late one’. One of his greatest claims to fame was how he finished first in a Derry Féis, beating Feargal Sharkey into second place. The fact that Feargal Sharkey was suffering from a heavy cold rarely got mentioned.

His time in England came to an end when the then Principal Br. McCrohan told Dominic he was ‘bringing him home’. He started teaching Religious Studies and Economics at Omagh CBS in September 1993. Lessons delivered by Dominic reflected his personality, they were lively, could involve music and were always great ‘craic’.

Dominic very quickly became an indispensable part of life in the school. He rapidly became immersed in the extra-curricular activities of the school, his long running involvement with the Young Enterprise Company his most noticeable legacy. Dominic led pupils to multiple awards, both regionally and nationally, and was rightly proud of ‘bringing home the bacon’. He was presented with a lifetime achievement by the Young Enterprise Company in April 2019. At Christmas time, he could be found dressed as Santa Claus for the Christmas Party with Arvalee School. He will be fondly remembered by past pupils for his energetic delivery of the RE and Enrichment Programme for senior pupils. 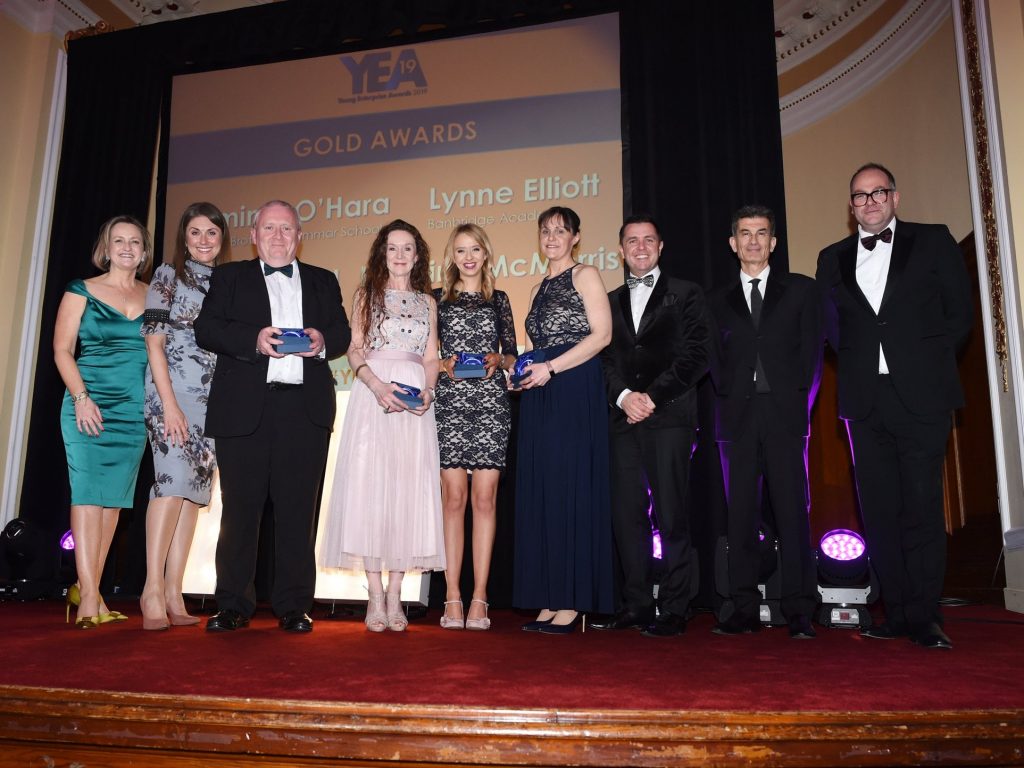 Dominic was an integral part of the Omagh CBS Community. He was loved by staff and pupils alike, with everyone delighting in his company. Staff members would flock around Dominic during lunchtimes in the staffroom as he held court and entertained all. The sound of infectious laughter emanating from the staff room when Dominic was present was a daily event. Indeed, you would literally hear Dominic before you saw him. Any troubles or concerns felt that day melted away into the background in the time spent in Dominic’s company. A one liner would be delivered in lightening quick time and always in a good-natured way. Indeed, it was a badge of honour to be at the receiving end of a one liner from Dominic.

The person asked to be the Master of Ceremonies for numerous school events, including Prizegiving, Productions and Concerts, was always Dominic. He could engage an audience with his clever and sharp observations, often digressing into ‘Did you know that….’. His eclectic musical interests were evident for all to see as he demonstrated his DJ qualities on Sports Day. A playlist ranging from Dean Martin to Britney Spears would always include something to please everybody. His attire for Sports Day was often a hot topic of conversation, with his bedroom slippers even making an appearance on an occasion.

He was an avid supporter of Derry City and Liverpool Football Club and revelled in celebrating their intermittent titles and engaging in related banter with pupils and staff alike. He took great delight in seeing the improvement that the school has made on the soccer field in recent times. His knowledge of Gaelic Games was limited, a fact in which he revelled. The popular belief is that after Tyrone were defeated in the 1995 All Ireland Final, when taking the class register Dominic proclaimed, “Samuel Maguire, Absent.” As a proud Derry man, he revelled in the county rivalry between Tyrone and Derry. His sporting prowess was a regular boast, including the unsubstantiated claim that he won a schoolboy international football cap for Northern Ireland.

He was a loyal and supportive colleague. Wise words of counsel would be offered and appreciated by colleagues, particularly by younger staff members. First and foremost, his warm humanity ensured that all who met Dominic were treated with a kindness and decency that underpinned his caring nature. As a Year Head, his understanding, empathy and natural people skills helped many students in times of pastoral and academic need.

He bore his recent illness with great bravery and dignity. He was surely comforted by his great faith and the unwavering support of his family and many close friends. On September 17th, 2021, Omagh CBS hosted Emmett O’Hara, Dominic’s son, in his fundraising events to raise money for the Motor Neurone Disease Association. The large turnout of Dominic’s colleagues, past and present, is testament to the high esteem in which he is held and the love that so many had for Dominic. Indeed, his wake and funeral mass was attended by those same colleagues and many pupils, both past and present.

Dominic, who lost his wife Dolores in 2009 following her own courageous battle with illness, is survived by his two children, Aimee and Emmett, his partner Grainne McGurk and was the beloved brother of Michael, Patricia, Denis, Pauline and the late Siobhan R.I.P.

His memory and legacy will live long within the Omagh CBS community.