Omagh CBS U13 soccer team were crowned NI School’s Cup Champions on Wednesday when they defeated Our Lady and St Patrick’s, Knock (OLSPK) 4-3 in a pulsating final at Allen Park, Antrim. The CBS boys brought home the School’s Cup for only the second time in the school’s history, after winning the competition for the first time in 2017. 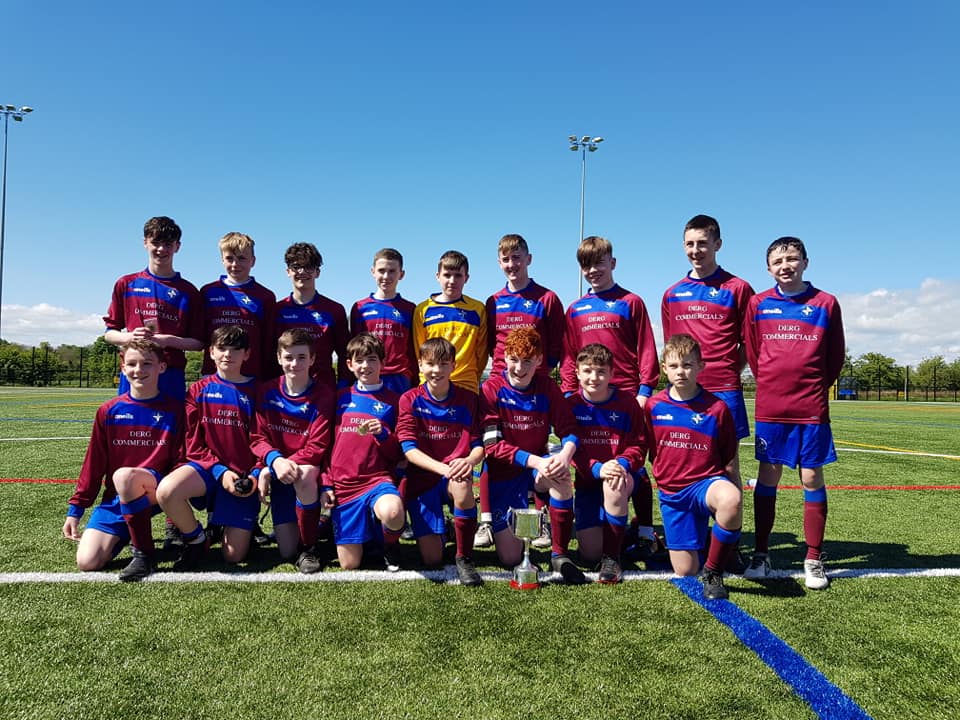 The CBS defeated OLSPK in the final back in 2017 in what was a very tough encounter, and this match proved to be no different. Early on the CBS struggled to settle and suffered a scare after five minutes when a long ball over the top set the OLSPK striker through on goal and he clipped the crossbar from the edge of the penalty box. That seemed to wake the CBS up and they began to exert a measure of control on the game. Callum Daly and Paudi Dillon took charge in midfield as the Omagh side carved out a series of openings. After ten minutes a pass from Dillon allowed Charlie Donnelly a snapshot from inside the area but the striker could only fire straight at the goalkeeper. Sean Broderick and Tom Papakyriacou-Gavin were causing problems down both flanks and after fifteen minutes Papakyriacou-Gavin beat his man and sent over a great cross which Donnelly met with a powerful header only to see the ball rebound back off the crossbar. On the other flank Broderick worked his way to the byline and his pullback was met by Reece McAleer who thought he had scored only for the OLSPK defender to push the ball onto the crossbar with his hand. Controversially the referee waved play on and two minutes later, against the run of play, the CBS found themselves a goal down as the OLSPK striker got himself free on the right side and drove into the box and despite a last ditch block by John Edgar, the rebound fell fortunately for the Belfast side and the striker fired the rebound past keeper Aidan Colton. It did not take long for the CBS to restore parity as five minutes later Broderick again beat his man and fired a low cross into the box which fell kindly for McAleer who made no mistake, firing high into the net. The CBS were well on top at this stage and the centre-back pairing of Nathan Farry and Dillon Chism were coping very well with any threat posed by OLSPK and showed great composure on the ball to give the CBS a solid platform from which to launch their attacks. As the half-time whistle sounded the Omagh boys could consider themselves unlucky not to go in at the break with their noses in front.

The CBS started the second half brightly and within five minutes they got themselves in front as Donnelly seized on some hesitation at the back to win the ball and drive through on goal to coolly slot into the bottom right corner. OLSPK fought back and drew level within three minutes as a cross from the left evaded Edgar at the back post and the OLSPK winger made no mistake from six yards. Despite this setback, captain Daly kept driving his team forward and Donnelly produced a piece of magic as he chested down a long ball from Chism and despite a stumble rose to his feet to turn and fire an unstoppable drive into the top left corner from fully 25 yards. The CBS grew in confidence after that and didn’t have to wait long to score their fourth. Papakyriacou-Gavin was a constant threat down the left side and it was from one run that he found Donnelly on the left side of the box and the frontman duly cut inside to fire a low drive into the bottom left corner to complete his hattrick. At this stage with fifteen minutes remaining things looked fairly comfortable for the CBS as Conor Pritchard, Farry, Chism and Edgar were in control at the back and goalkeeper Colton was in assured form. With ten minutes to go however, OLSPK were thrown a lifeline as the referee harshly awarded a penalty for handball against Broderick and the OLSPK striker calmly slotted home to reduce the deficit to one goal. A nervy ten minutes followed but the CBS still carved out a couple of opportunities in the dying minutes as McAleer and Donnelly continued to cause problems. A great run down the left by McAleer created space for Donnelly who squared across goal for Ben Kelly to shoot but the OLSPK goalkeeper reacted well to smother the ball. The Omagh side stood firm until the final whistle to take the crown of School’s Cup Champions.

Winning this competition and being crowned the best in the country is a magnificent achievement and the CBS have now qualified for the UK Championships which take place in England in May 2020, where they will face the respective winners from England, Scotland, Wales and Ireland. A special mention must go to the travelling support who pushed the boys on until the very end.