Omagh CBS U16’s were crowned NI School’s Cup champions after they defeated Belfast Boys Model school at the Blanchflower Stadium, Belfast in the final last Wednesday. They had to come through an absolute nail-biter, which finished 2-2 after extra-time, and had to be settled on penalties, in which the Omagh boys held their nerve to win 5-4. 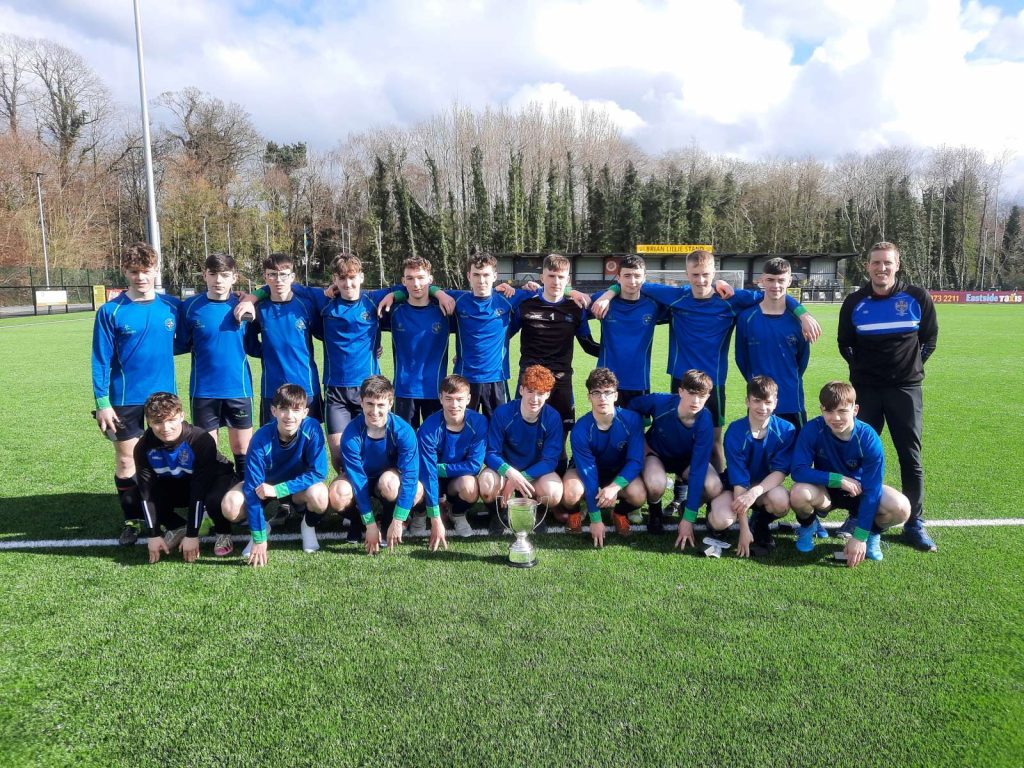 The CBS travelled to Belfast to take on their illustrious counterparts having not lost a single match since they were defeated at the Quarter-Final stage of the NI School’s Cup in Year 8. The boys won the U-13 School’s Cup in 2019 and reached the final at U-14 in 2020, only to see the trophy shared as coronavirus took hold. Despite this unbeaten record stretching back to 2018, the local boys were still touted as underdogs as they travelled to their opponent’s backyard bidding to make it ‘three in a row’. Two goals from Charlie Donnelly, five clinical penalties and a penalty save from Aidan Colton saw the trophy travel west to the CBS.

The first half was not one for the purist as both teams struggled to settle on the ball and produce much in the way of quality apart from a few glimpses from both teams but it was not lacking in intensity. The match started as many expected, at a frenetic pace, with both sides creating chances in the opening exchanges. The Boys Model had the first opening less than a minute in as their frontman was found with a yard of space eighteen yards out but he blazed over. The CBS responded minutes later as some excellent work from captain Callum Daly on the halfway line released Ben Kelly but his shot was well saved. Charlie Donnelly had his first glimpse of goal six minutes in as he outpaced the Model backline to cut inside from the right but again the Belfast goalkeeper produced an excellent stop and from the resulting counter-attack CBS goalkeeper Aidan Colton was forced into an excellent save low to his left. The CBS took the lead on eight minutes as Kelly and Paudi Dillon played a neat one-two in midfield to allow Kelly to surge towards the penalty box before he squared for Donnelly. The frontman still had a lot to do as he took a touch before swivelling and firing low into the bottom corner from the edge of the box. There was little in the way of chances after the goal until the game burst into life in the dying minutes of the half. First, the Model fired agonisingly wide from a tight angle before Kelly collected an excellent pass from Nathan Farry to outpace two defenders and fire a shot from the edge of the penalty area only to see his effort well saved. The Model were always looking dangerous from set-pieces and in first half stoppage time they got their reward as a corner was nodded down at the back post and the Model attacker poked home to level the scores.

The second half was a much better spectacle in terms of football as the CBS looked more composed on the ball as they moved it around the pitch and five minutes into the half an excellent passing move involving Tom Gavin, Brian Gallagher and Paudi Dillon saw Donnelly receive the ball in the penalty box and he made no mistake expertly firing first time past the goalkeeper to put his side in front. The Model responded quickly and the lead lasted less than four minutes as the CBS were outdone by another set-piece. A free-kick from the edge of the box was headed home by the Boys Model midfielder. The Omagh men responded well to the setback and were playing their best football of the game as centre-backs Dillon Chism and Farry began distributing the ball well, allowing full-backs Charlie McCrory and Ruairi McCullagh to get forward at every opportunity. It was from a McCullagh cross that the CBS could have retaken the lead as his angled ball found Donnelly inside the penalty box but his volley was well saved and on the other flank Gavin and McCrory were causing the Model defence all sorts of problems. The Model were always dangerous from set-pieces and Colton had to be alert to tip over a volley from the Model striker as it fell to him inside the penalty box but neither side could find a way through as the match finished two each after ninety minutes.

Into extra-time and the CBS were looking the stronger without creating many clear-cut openings. The introduction of Sean Broderick provided fresh legs in the midfield and this proved important as the clock ticked down. The only chance of note fell to Dillon on the edge of the box, but his sweetly struck volley was well saved by the Model netminder as the final whistle sounded soon after. The game would be decided on penalty kicks and the Omagh boys showed nerves of steel to convert their first four penalties. Colton made himself the hero as he produced an excellent save to stop the Model’s fifth, allowing captain Daly to coolly stroke home the winning penalty to send the enthusiastic support into raptures.

A truly momentous occasion for the CBS boys and one that will live long in the memory of the players, and the supporters who travelled to Belfast, as they brought the NI School’s Cup back to Omagh. 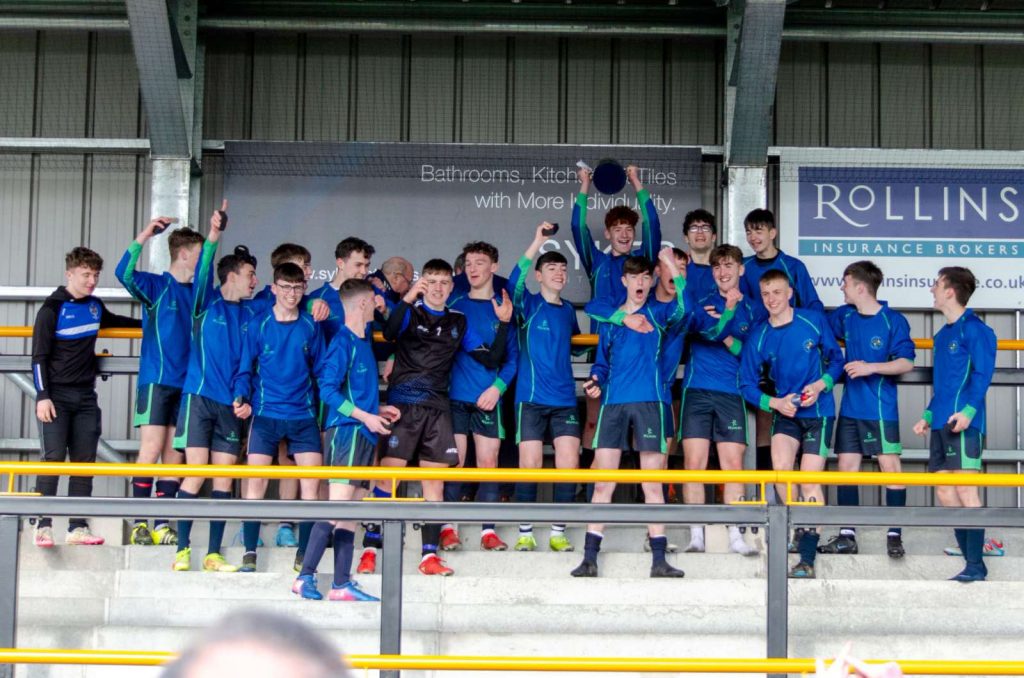